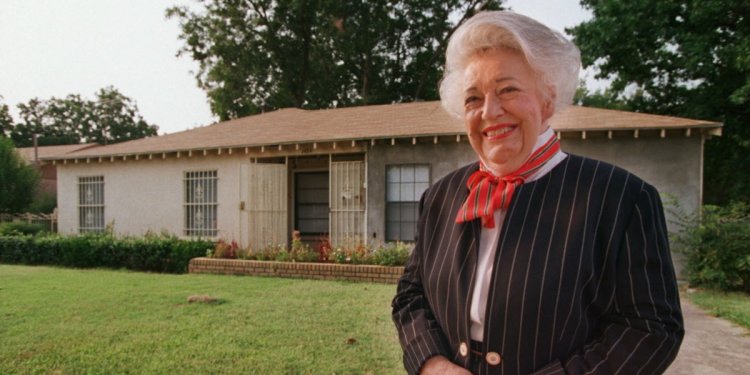 Born Vera Lucille Koch in the small town of Leslie, Ark., on March 9, 1911, the woman who would later take the professional name “Ebby Halliday” was admired worldwide for her ability to combine leadership with femininity and business acumen. Her impact on the residential real estate industry was unmatched. Over the years, Ebby opened the doors to successful careers for thousands of people; in particular for women at a time when opportunities were limited.

Ebby began working at age 8 near Abilene, Kansas, riding her pony from wheat farm to wheat farm selling Cloverine salve, which she marketed as good for bug bites, cuts and bruises. She quickly learned the profit system, the value of repeat business and the importance of attention to customers.

During the Great Depression, Ebby helped support her family by selling general merchandise and eventually hats at a department store in Kansas City. In 1938, she was transferred to Dallas, Texas, as hat department manager at the W.A. Green Store. She would soon open her own hat boutique.

When a customer’s husband built 50 single-family spec houses made of insulated concrete, he knew exactly who to call. “If you can sell those crazy hats to my wife, maybe you can sell my crazy houses, ” legendary Texas oilman Clint Murchison said to Ebby. Ebby sold all of them and soon changed her product from hats to houses, and the rest was history.

Ebby founded Ebby Halliday, REALTORS® in 1945. Today, the Dallas-based company is the largest independently owned residential real estate services company in Texas and ranks 10th in the nation. The 70-year-old company, with 1, 700 sales associates, participated in approximately 19, 200 property transactions in 2014 with a sales volume of $6.64 billion.

For Ebby, a successful life was about so much more than extraordinary sales figures. She often said her most successful sale was when she “sold” Maurice Acers on marrying her on April 18, 1965. Ebby and Maurice met in a chance encounter while both were on business trips to Beaumont, Texas. A former FBI agent and successful lawyer, Maurice was truly the love of Ebby’s life and her eyes would twinkle whenever she spoke of him.

Ebby’s other great passion was service to the community she proudly called home. She and her company’s philanthropic impact on North Texas cannot be overstated. In 2014 alone, the YWCA of Metropolitan Dallas announced Ebby’s Place, which houses the new YW Women’s Center, and Juliette Fowler Communities announced The Ebby House, a transitional community for young women who have aged out of foster care. Ebby did not have children of her own, but she helped educate and support many young people.

Over the years, Ebby, a tireless volunteer, served the community as president of the Thanksgiving Square Foundation and on the boards of the St. Paul Medical Foundation, the Communities Foundation of Texas, The Dallas County Community College District Foundation and the Better Business Bureau. Among the many organizations in which Ebby was active was the Alexis de Tocqueville Society for United Way, the Dallas Symphony Orchestra Guild and the State Fair of Texas. She served as president of the North Dallas Chamber of Commerce and the Greater Dallas Planning Council and on the Dallas Park and Recreation Board.