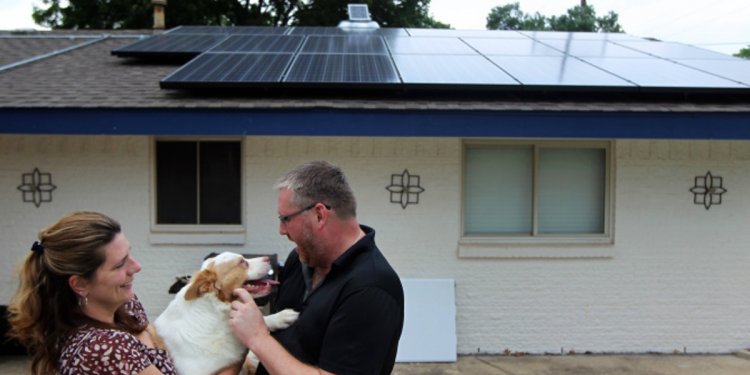 If Chicago is the City of Big Shoulders, then Dallas is the City of Big Everything Else. Big hats, big belt buckles, big steaks, and tall buildings are the rule in Dallas, but that’s not all the city has going for it. Dallas has a bustling arts district, an amazing food scene, and plenty of culture to go around.

There’s another thing Dallas has in abundance: sunshine. Lots and lots of it. We’d all like it to go away sometimes, when the temperature is over 100 and not even a double scoop from Carnival Barkers eaten in the shade will cool a person off. But the fact is, that sunlight is actually energy—energy you can harness with solar panels on your roof. And you can save money on your electric bills, too.

Now, Dallas is a little different on account of Texas’s deregulated energy marketplace. As you know, you can choose to buy energy from dozens of different companies, and the competition has actually done a pretty good job of keeping prices low. We wanted to compare solar to the kids of prices you would expect to pay if you shopped around, so we looked at Power to Choose, the online energy marketplace, for the price for 100% renewable energy in the heart of the city.

As of June 2015, we found an average cost of about 8.1 cents per kilowatt-hour (kWh) for average electricity users, and about 9.1 cents/kWh for high energy users. That’s pretty cheap—about 25% cheaper than the national average—and it means solar won’t save you quite as much money in Dallas as it is in other parts of the state (or the country).

BUT – Solar can still save you a bunch of money in Dallas, because Oncor offers great rebates for people who buy their systems with cash or a loan. We’re talking thousands off the cost. Combined with the national 30% tax credit, a solar panel system in Dallas comes in at only about half the sticker price after just 1 year. That kind of discount makes solar worth it in Dallas, and it can save you nearly $12, 000 in electricity costs over the life of the panels.

Here’s what we’d do if we were deciding to go solar in Dallas:

Our Solar Strategy for a Home in Dallas

As you can see in the chart above, paying a whole bunch of money up front to get solar installed on your house makes you the most money over the long term. Those green bars start to rise quickly after 2028, when your system has paid back your initial investment and the profits start piling up!

That said, not everyone is ready to spend $20, 000 on a long-term investment, no matter how much it’s going to make them. If you do have that kind of money, get solar installed ASAP, and it will save you buckets of money in the next 25 years. But if you’re like us and your couch cushions hold about the same amount of money as your bank account, read on!

If we were interested in going solar in Dallas, the first thing we’d do is get quotes from trusted local installers. Then we’d price out their lease options. You make less money over 25 years in a solar lease, but you don’t have to put any money down, and your starting lease payments are just about equal to the energy bill savings you’ll see.

That basically means you get solar panels on your roof for free, and as electricity rates rise over time, you’ll save more and more money each year, ultimately coming out over $3, 000 ahead at the end of the lease. Thing is, these numbers we’re looking at are conservative estimates.

The solar market in Texas is getting competitive, considering the rebates and tax credits that are available to leasing companies. They’re going to fight for your business. So sign up for free quotes from our trusted Dallas-area partners, and you’ll get customized estimates for how much you can save with solar!