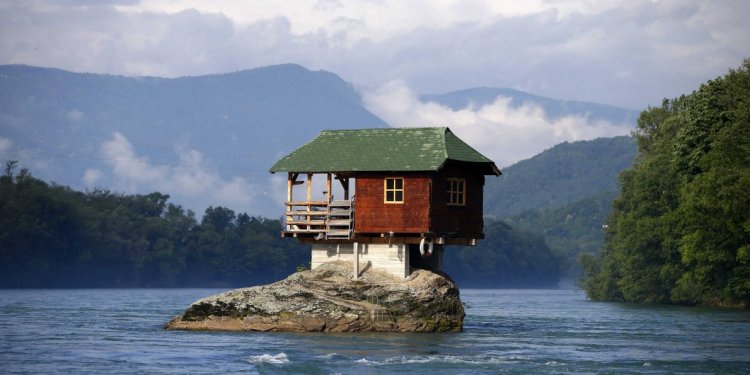 Best looking houses in the world

Despite being a far cry from a grand mansion or a stately home, the futuristic single-storey three-bedroom Fayland House near Henley-on-Thames, Oxfordshire, has beaten off competition from around the world to be crowned the best new home by The Architectural Review

Described by the judges as having a 'rigid, rhythmic façade' and a 'challenging' design, the 'asymmetrical' property was completed in 2013

It is owned by multi-millionaire property developer Mike Spink and his wife Maria, who paid £6.7million for the prime 50-acre plot in the Chilterns in 2008 before knocking down the existing house on the site.

The site was previously occupied by an early 20th-century house – said to be of no 'architectural value' – which was made up of a series of eight buildings, including stables, a gym, a greenhouse and an outdoor swimming pool.

The Spinks then brought in leading architect David Chipperfield to design a three-bedroom home with a thoroughly modern twist.

Like the best country piles, the house - called Faylands - is nestled among rolling hills and surrounded by a wildflower meadow with its own herd of cows.

But that's where the similarities end.

Instead of cosy rooms with roaring fires, a farmhouse kitchen with an Aga or a traditional brick exterior, the house is simple and modern to the verge of being empty.

A total of 11 concrete columns hold up the front of the property making it look more like an industrial unit than a home, while the flat roof and oblong-shape make it resemble more of a bunker than a sprawling estate.

However the judges of The Architectural Review House Awards 2015 - a competition to find the world's best house built in the last five years – heaped praise on it.

Some of the biggest names in modern architecture described it as 'a radical take on the English country house', 'subversive and as having a 'beautiful enfilade' - where a suite of rooms with doorways are in line with each other.